There’s something about Ancient Egypt that internet cafe software developers love. Ramses II slot games takes players back to the time of Egypt’s eponymous pharaoh, widely regarded as the greatest ruler of the Egyptian Empire. The player assumes the role of the villager and must break into the pyramids to purloin the emperor’s treasure. In order to escape scot-free, you must achieve this feat while evading Ramses’ loyal lieutenants. 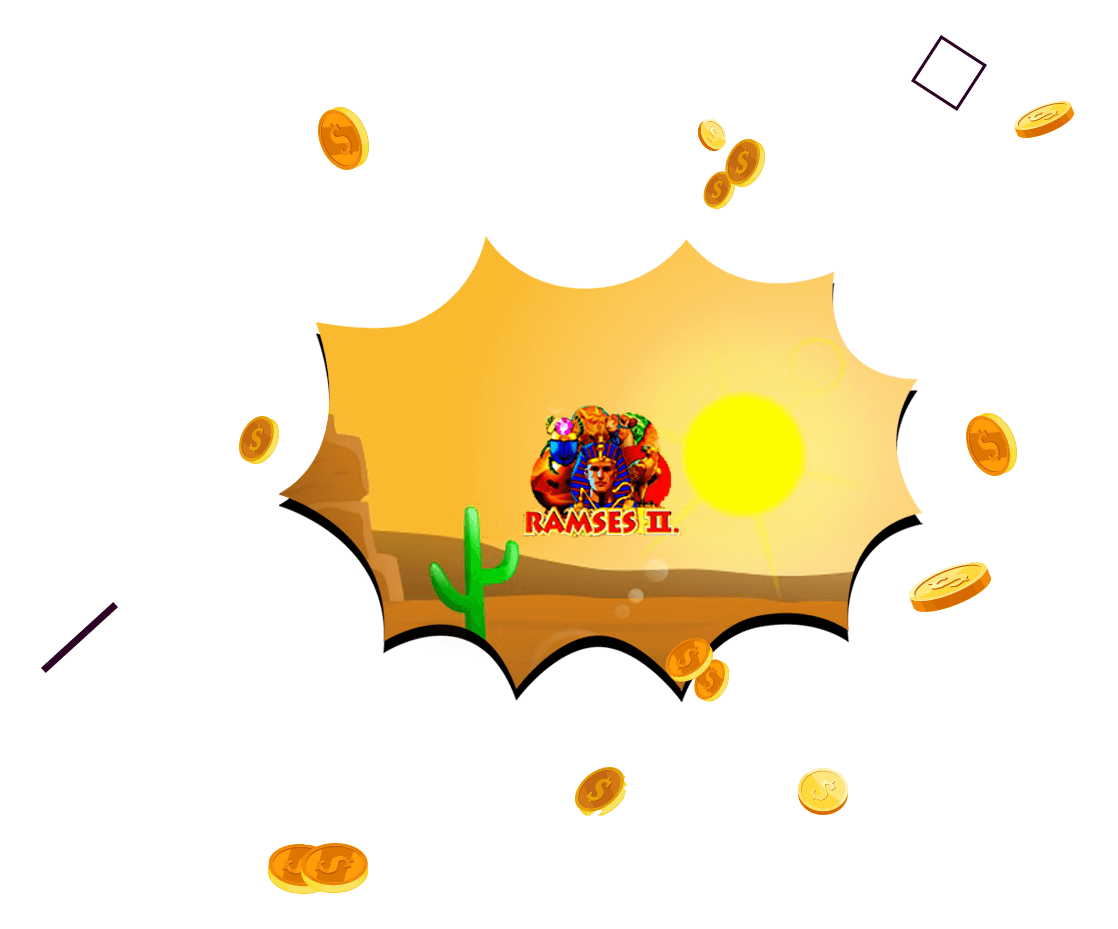 As you might expect, symbols in the slot machine stick closely to the Ancient Egypt theme. Thus, we see the proud eponymous pharaoh, a golden sphinx, a muscle-bound figure wearing an Egyptian headdress and the Giza pyramids at sundown. Other symbols include a camel, a scarab, a golden eagle and playing cards from 9 to Ace.
The animation is solid if unspectacular; the symbols stand out on the reels, bright and gaudy as they are, and the backdrop is designed to resemble a stone tablet scored with many hieroglyphics. The sound effects, on the other hand, have nothing to do with Ancient Egypt; rather, they’re indistinguishable from regular fruit machine audio.

Winnings are paid out on combinations formed on active pay-lines, with players able to win by matching just two symbols. Standard slots fare then, and nothing to get excited about in and of itself. Still, a word on the high-paying symbols is necessary. The pyramid and sphinx symbols sit in the middle of the pay-table, yielding 250 coins for a combined five. The camel symbol is also somewhat valuable, worth 400 coins for five-in-a-row. The muscle-bound Egyptian and golden eagle symbols, meanwhile, are worth 125 coins for four and 750 coins for five. One of the biggest winners on the board, though, is the symbol of Ramses himself, which also happens to be the game’s wild. Four of these will net you 1,000 coins, while five is worth 2,000 coins. 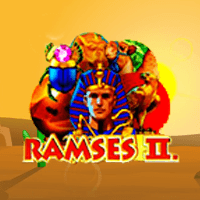 As mentioned, the Ramses symbol acts as the game’s wild. As such, it can substitute for all other symbols – except the scarab scatter – to produce winning combinations. Considering it’s also the highest-paying symbol, you’ll be praying it floods the reels during your game. And that’s to say nothing of the x2 multiplier on every win that uses a wild.

All wins in Ramses II pay from left to right, except the scarab scatter; scatters yield wins wherever they happen to land on the screen. Land two, three or four and you’ll be given 40, 100 and 500. Five scatters in a line yields a massive 3,000. Three or more scatters triggers 15 free spins, into the bargain. What’s more, while you’re using up your freebies you’ll be given the added bonus of a 3x multiplier, increasing the chances of you bolstering your coinage. One must note that it’s not the norm to receive multipliers during free spins, so this fact is certainly a feather in the cap of the Ramses II game. 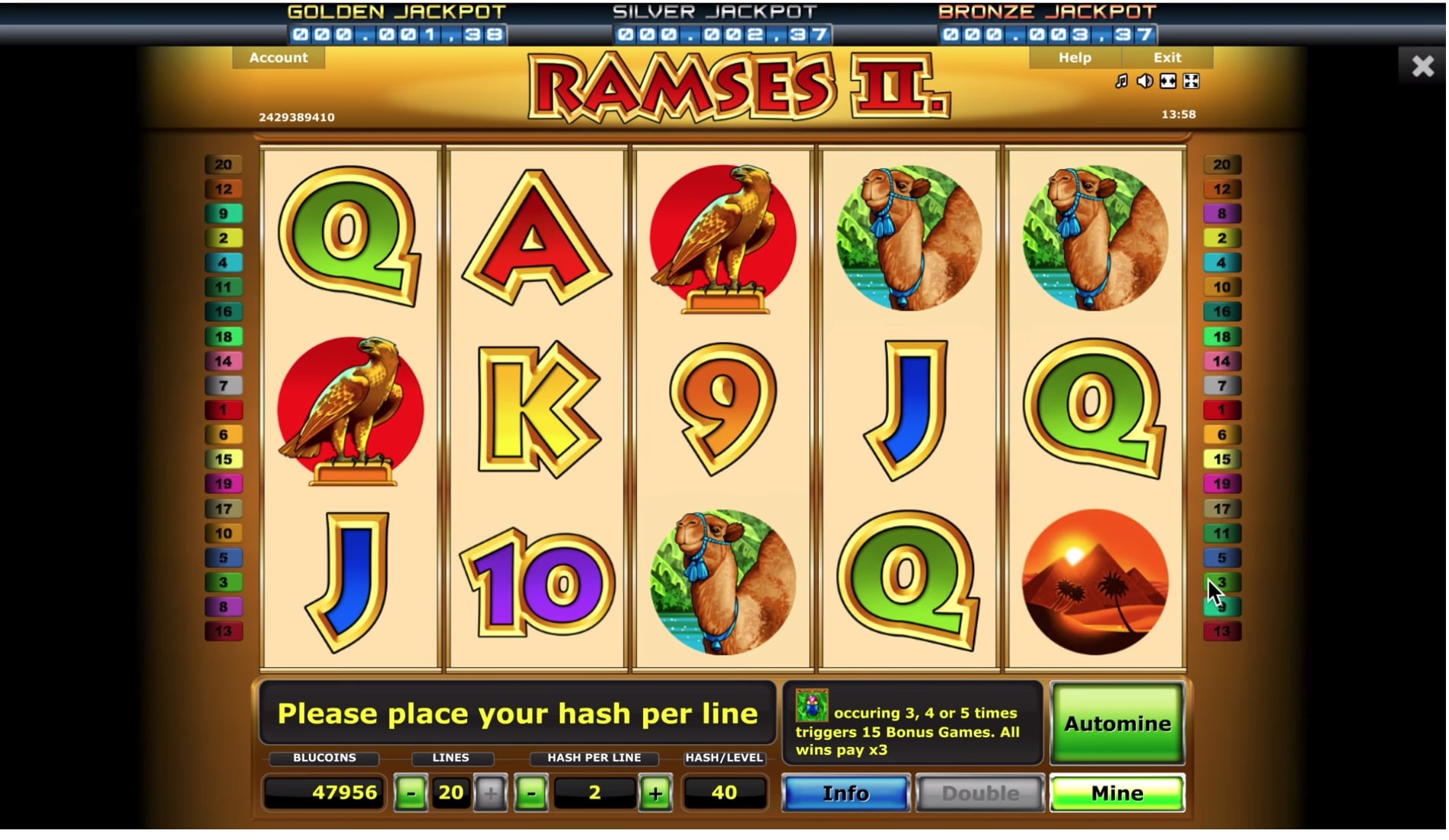 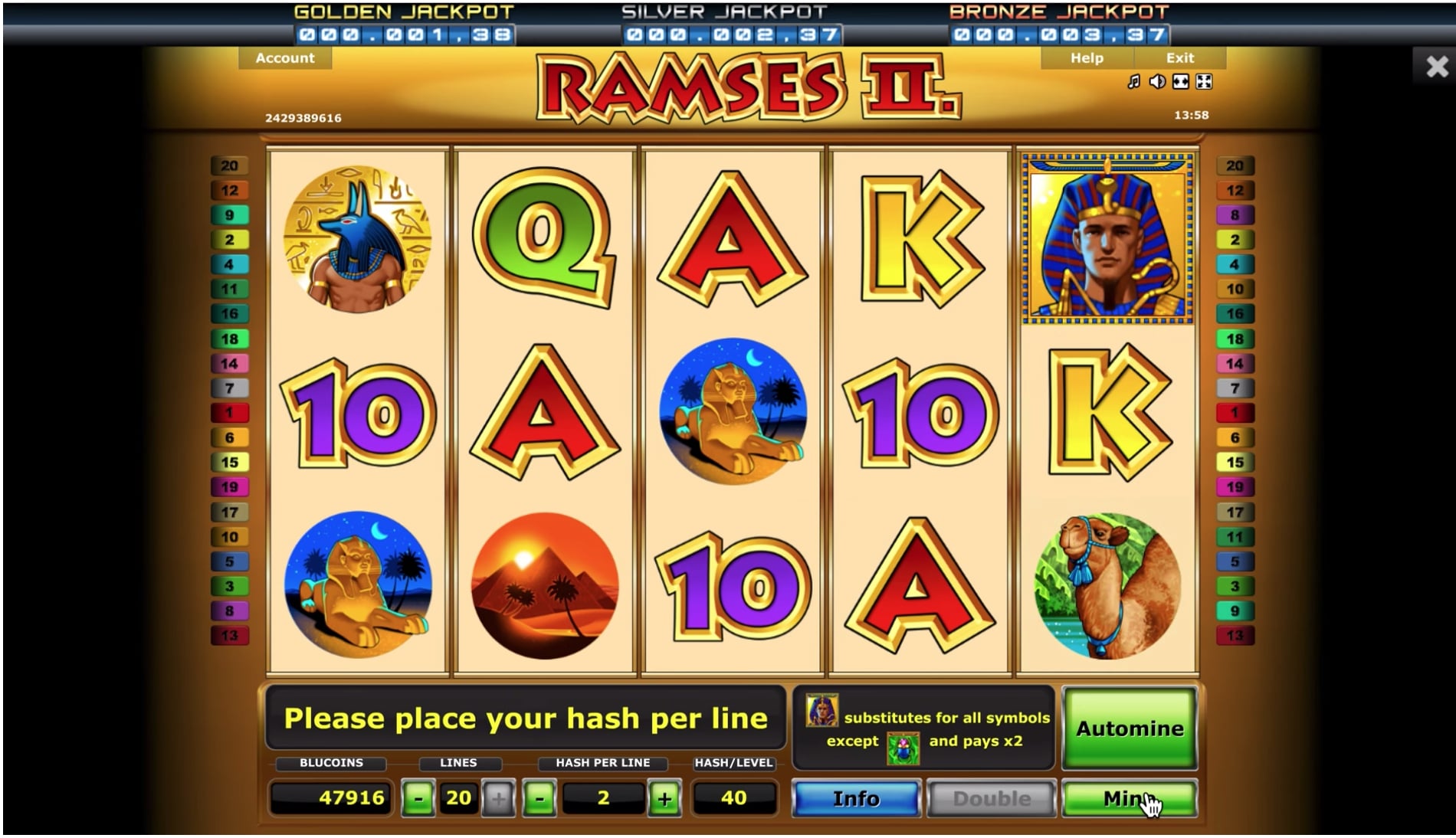 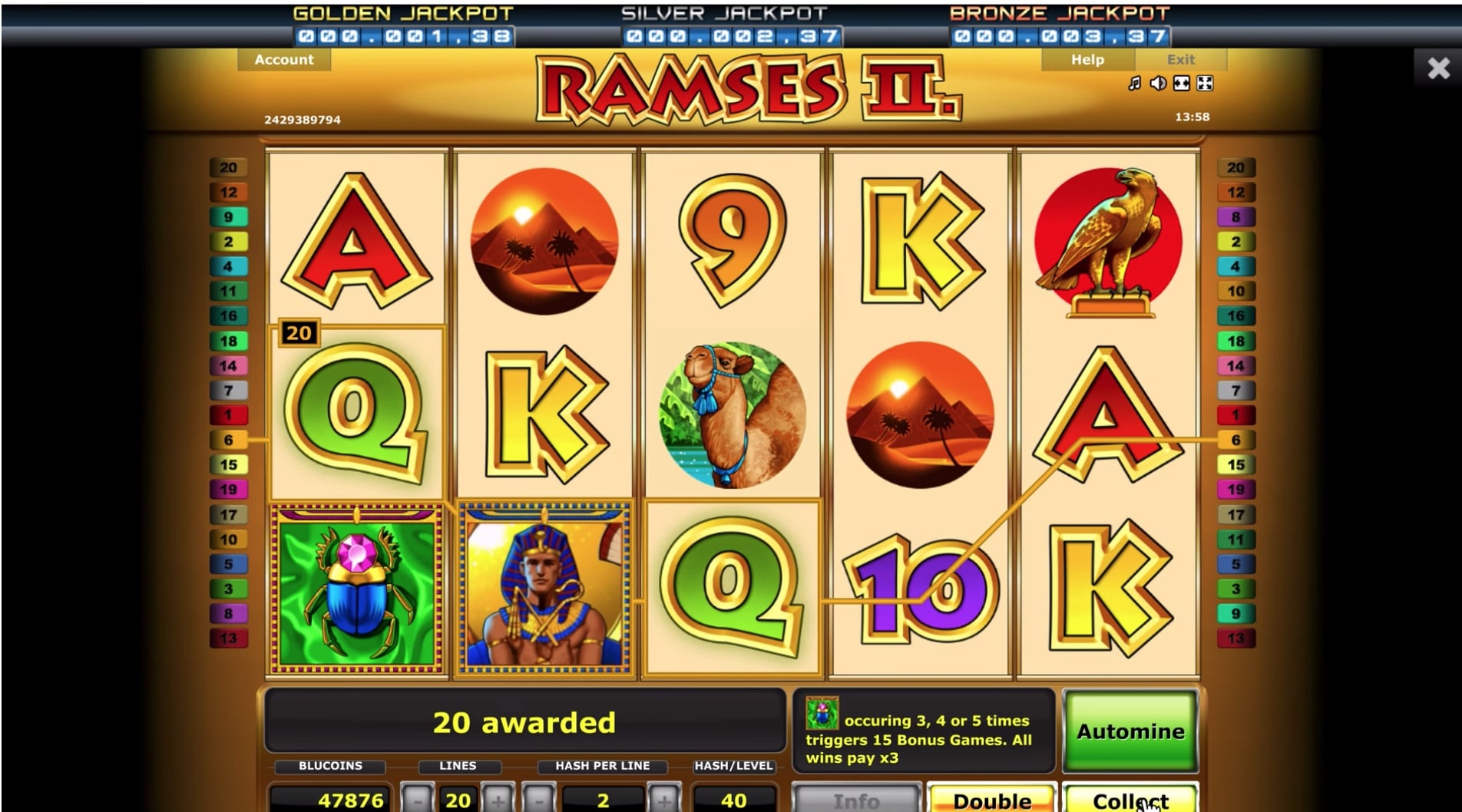 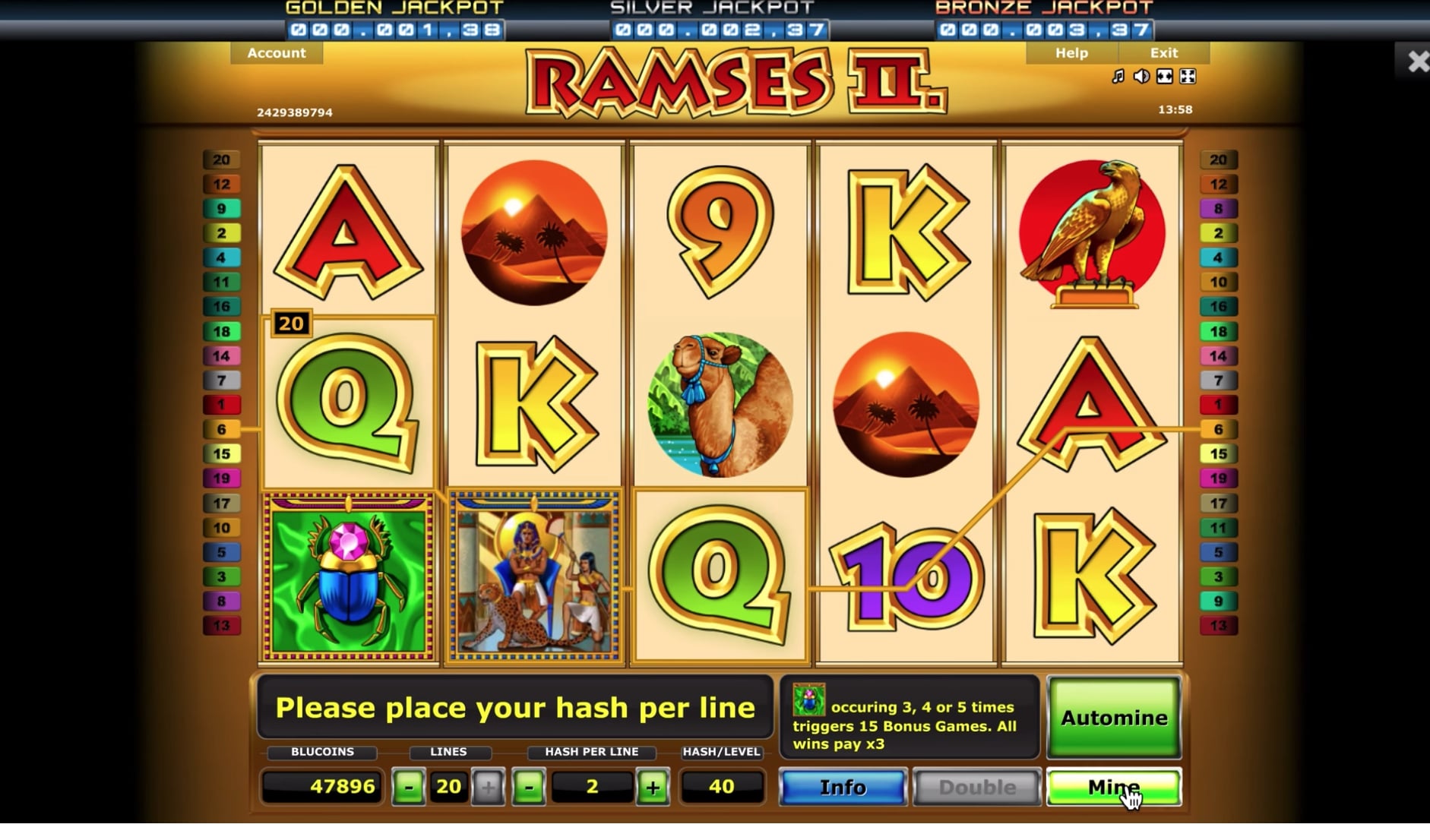